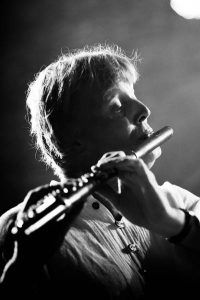 Jacques Zoon studied at the Sweelinck Conservatory in Amsterdam with Koos Verheul and Harrie Starreveld and at the Banff Center for the Arts, Canada, with Geoffrey Gilbert.

He was a member of the Netherlands – and later of the European Community Youth Orchestra under conductors as Abbado and Bernstein.
He has been principal flautist of the Amsterdam – and the The Hague Philharmonic Orchestra, and from 1988 until 1994 of the Royal Concertgebouw Orchestra (with whom he performed as a soloist in the concertos by Mozart, Jolivet, Martin and Gubaidulina) and from 1989 until 1997 of the Chamber Orchestra of Europe. On various occasions he played as principal flute with the Berlin Philharmonic Orchestra under direction of Claudio Abbado, during tours to Rome and Vienna, to the USA and during the Eastern Festival Salzburg.

In 1997 he was appointed Principal Flute of the Boston Symphony Orchestra. With Seiji Ozawa he was soloist in Mozart’s flute concerto in G, with Bernhard Haitink soloist in Bernstein’s “Halil”(2001).
He appears as a soloist with many renowned orchestras, plays recitals and participates in festivals throughout the world.
In May 2002 he played the Mozart flute concertos with the Boston Baroque Orchestra on a classical flute and recorded them for the label Telarc.
In 1998 Zoon was called “musician of the year” by the Boston Globe.
In 1981, he won 2nd prize at the Willem Pijper competition. In 1987 he was awarded the “Prix special du Jury” at the Jean-Pierre Rampal competition in Paris. At the Scheveningen Competition 1988, he not only won third Prize, but also the prize for a contemporary composition.

As a soloist and chamber musician he made various recordings for Philips, Decca, DG, Vanguard Classics, Schwann-Koch, Pony Canyon, NM-Classics and Boston Records. In 1997 he was, together with pianist Bernd Brackman, awarded an Edison for a recording of Dutch contemporary Flute/Piano repertoire.
His active interest in the flute embraces technical aspects for improving the instrument. Representing the wooden flute, he is partly responsible for its remarkable comeback, both in solo- and orchestra playing. In 2017 he founded Zoon&Maia Flûtes, building wooden flutes of his design.

From 2004 to 2014 he played as principal flautist of the Mozart Orchestra and the Lucerne Festival Orchestra, both founded and conducted by Claudio Abbado, and since 2008 he is the principal Flute of the Saito Kinen Orchestra conducted by Seiji Ozawa. He also continues to play with the LFO, now conducted by Riccardo Chailly .

From 1988 until 1994, Zoon was a teacher at the Rotterdam Conservatory and from 1994 until 1997 at Indiana University.
From 1997 until 2001 he taught at Boston University and New England Conservatory. He then became Professor in Flute at the Hanns Eisler Hochschule in Berlin, Germany.

Jacques Zoon moved to Geneva in September 2002, where he now is Professor in Flute at the Haute Ecole de Musique. Since 2009 he has also been appointed professor for Flute and Chamber Music at the Reina Sofia Music School in Madrid.