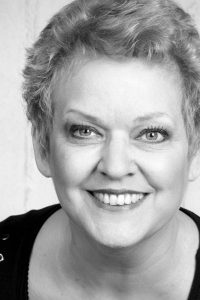 Gudrun Pelker began her artistic training at the Hochschule für Musik in Cologne, where she studied with Prof. Josef Metternich, as well as taking voice Master Classes with Birgit Nilsson, Hilde Zadek and Judith Beckmann, and Lied with Charles Spencer and Norman Shetler.
She made her debut on stage in 1988 as Carmen at the Internationale Sommerfestspiele auf Schloss Weikersheim which was followed by contracts in Gelsenkirchen and Frankfurt, where she sang more than 40 roles including Carmen, Cherubino, Hänsel, Mrs. Quickly, Gräfin Geschwitz.
Mezzosoprano Gudrun Pelker has had an unusually varied career. She is at home on both the opera and concert stages, sings oratorio and Lied, and is a secure in historical repertoire as she is in contemporary works.

She has been invited as a guest at theatres including Staatstheater Wiesbaden, Oldenburg, Hannover, Cologne, Krefeld, Hagen, Essen, Dortmund, Basel, at festivals such as the Schwetzinger Festspiele, Münchner Biennale and the Wiener Festwochen.
In addition to her career in opera, Gudrun Pelker concertized with an extensive repertoire including old masters and contemporary composers, among them Handel – Messiah, Beethoven – Missa solemnis, Mendelssohn – Elias, Verdi – Requiem, Frank Martin – In terra pax, Arthur Honegger – König David. Furthermore, she worked with specialized contemporary ensembles such as Klangforum Wien, Musikfabrik NRW und ensemble modern, Frankfurt.

Gudrun Pelker began teaching at the Folkwang Hochschule Essen and was called to a professorship at the Hochschule für Musik, Theater , Theater und Medien in Hannover in 2007.