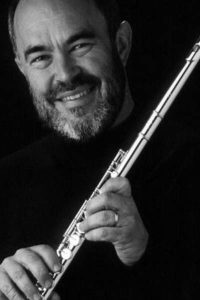 He made his first appearance as a soloist at the age of 17, in the “Salle Pleyel” in Paris with the Philharmonic Orchestra of Radio France.

After his participation at the International Competition of Geneva in September 1978 when he was one of the three French flutists who reached the semi-finals, he was ranked in first position and accepted after a brilliant performance, at the Conservatoire National Supérieur de Musique de Paris, in Jean-Pierre Rampal’s class.

He went on to receive the 1st Prize for Flute in 1982. A few months before, he was nominated Principal Flute in the “Orchestre National du Capitole de Toulouse”, a position that he has held since July 1982. While taking part in the multiple activities of the orchestra, he regularly gives chamber music concerts leading him to appear in Germany, the United States, and Japan as well as in France during many festivals (Nice, Menton, Besançon, Escarène, La Chaise-Dieu…)

In addition along with some of his colleagues and friends, he has created the season “les Clés de Saint-Pierre” which he has organized every year since October 2000 and which is now an established part of cultural life in Toulouse.

François Laurent is prize winner of the international competitions of Geneva in 1983 and Kobe in 1985.

He also played principal flute as part of the “World Philharmonic Orchestra” in Montreal in 1988 and was invited by the “Symphonieorchester des Bayerischen Rundfunks München” (dir. Lorin Maazel) in 1992. In a primarily orchestral discography (EMI Classics), he has made noteworthy recordings of the very beautiful music for flute by Claude Debussy, the “Prélude à l’après-midi d’un faune” as well as virtuoso recordings of Camille Saint-Saëns “Volière du Carnaval des Animaux” and of Peter and the Wolf by Serge Prokofiev. During their tour of Japan in 1992, he also made a very beautiful recording of French music with his friends in the Toulouse Wind Quintet: quintets and sextet with piano by Roussel, Milhaud, Poulenc, Damase, and Ibert for the Fontec Records label. He currently plays 18K gold Pearl flute.

Running regular master-classes in France and in other countries around the world (Belgium, Brazil, United States, Japan), he devotes much of his time to summer courses.