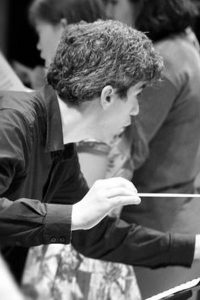 Florent Mayet began his musical studies at the age of six, learning solfege and piano, then he integrated the Maîtrise de la Loire, where he developed his musical knowledge. He then improved in piano, viola da gamba, choir conducting, analysis and writing at the conservatories of Lyon and Saint Etienne.

Graduated from the CNSMD in Paris (1st prize of direction of Gregorian choruses), he also studied conducting with Philippe Cambreling at Chalon sur Saône CRR, with Tomás Koutník at the Conservatoire supérieur of Prague, and with Laurent Gay at the University of Music of Geneva where he obtained a master’s degree in orchestral conducting. He also improved with Nicolas Pasquet, Ronald Zolmann, Jiří Bělohlávek, Arie van Beek and Jesus Lopez Cobos …

He conducts orchestras with such soloist as Pascale Feuvrier, Gilles Henry, Jamal Moqadem … Active in the field of Lyric, he is also adjunct conductor at the opera of Saint Etienne and Lyon.

He is also artistic director of the festival Baroque en Forez which takes place in autumn in the department of Loire in France.