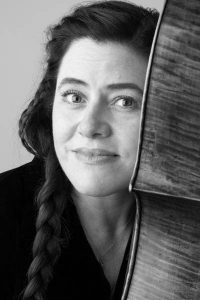 A radiant and committed personality, Emmanuelle Bertrand is recognized as a key figure in the European cello. Trained at the Superior National Conservatories of Music and Dance of Lyon and Paris in the classes of Jean Deplace and Philippe Muller, winner of numerous distinctions and international competitions, she was notably elected “artist of the year” in France by the magazine Diapason and the listeners of France Musique (2011), Diapason d’Or of the year for her CD “Le violoncelle parle” (the cello speaks). In 2002 she was revealed to the general public by a Victoire de la Musique. In 2017 the Academy of Fine Arts awarded her the prestigious Simone and Cino Del Duca Interpretation Prize.

When she was 25, she met the composer Henri Dutilleux who spoke of her as a “real revelation”. She has since dedicated works by Nicolas Bacri, Édith Canat de Chizy, Pascal Amoyel, Bernard Cavanna, David Lampel, Thierry Escaich and Benoît Menut. She also gave the world premiere of Chanson pour Pierre Boulez by Luciano Berio.

It was also during this period that she formed a duet with the pianist Pascal Amoyel, her partner in life and on stage, with whom she fervently defends both forgotten works and great repertoire.

Passionate about the links between music and the word, she works in close collaboration with Laurent Terzieff on texts by Jean-Pierre Siméon. In 2005 she co-wrote and performed with Pascal Amoyel “Le Block 15 ou la Musique en Résistance” directed by Jean Piat. In 2011, she created “Le violoncelle de guerre” in homage to Maurice Maréchal and his cello made in the trenches in 1915. She went on tour with this program until 2018 in turn with Didier Sandre, Christophe Malavoy, Francis Perrin, François Marthouret or Richard Bohringer. In 2020, Robin Renucci entrusted her with the role of Agafia in Oblomov by Gontcharov (Tréteaux de France), offering to link the roles of actress and musician.

The 2021-22 season will see the creation of a new musico-literary show based on Twenty Four Hours of the Life of a Woman by Stefan Zweig (directed by Laurent Fréchuret, alongside actor Gilles Chabrier and the Ensemble Sylf) and the release of her next disc dedicated to Brahms’ Sonatas and Lieder is released in summer 2021 (Harmonia Mundi) which marks the 20th anniversary of the duo she forms with pianist Pascal Amoyel.