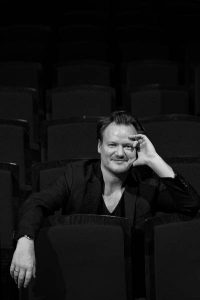 As a conductor, he made his debut in 2013 in the Berlin Philharmonic and at the Teatro Colon in Buenos Aires. In 2016 he conducted a concert of the Zurich Chamber Orchestra with Daniel Hope at the Schleswig-Holstein Music Festival, which was recorded for the movie “The Sound of Life”. In 2018 appearances took him to Budapest, Linz, Ljubljana, St. Petersburg and Graz.

In 2019 he gave his Japan debut at the Springfestival in Tokyo with the KiO „The Flying Dutchman“ under the direction of Katharina Wagner, he also conducted at the Musikfest Leipzig, tooking over the direction of the Bundesschulmusikorchester (German-National-Student-Orchestra) and he gave his Italian debut at the opening concert of the 44th Cantiere internationale d’arte Festival in Montepulciano.

In 2020/21 he conducted the opening concert of the Festspiele Mecklenburg-Vorpommern, continued the Wagner cycle in Tokyo with „Tristan“, worked with the Bavarian Radio Orchestra. He led his first season as music director of the Brixen Classics Festival.

Daniel Geiß teaches violoncello at the Hochschule Mainz and the Peter-Cornelius -Conservatory in Mainz and gives masterclasses in Italy, Germany, Switzerland, Serbia, Portugal and Russia.

Daniel Geiß teaches violoncello at the Hochschule Mainz and the Peter-Cornelius -Conservatory in Mainz. He gives masterclasses in Italy, Germany, Switzerland, Serbia, Portugal and Russia.

Since 2014 he is Artistic Director of the innovative teaching concept KLANGLABOR, a guiding principle for a future oriented orchestra education, which holds projects in Mainz, Graz, Dortmund, Lucerne, Heidenheim (as part of the Opera Festival), Montepulciano, Leipzig and as part of the EUphony orchestra project in Linz, Budapest, Belgrade, Zagreb, Vienna, Ljubljana and Cluj. Since 2019 he was invited to be part of the faculty of the distinguished Hope-Academy in Berlin, were he will return in 2022. He also teaches as guest at the academy of music in Berlin.