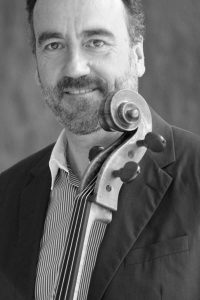 Born in Würzburg in 1968, Clemens Weigel started as a junior student at the Trossingen Musical College before he began his violoncello studies with André Navarra at the Vienna College of Music in 1987. After Navarra’s death, Clemens Weigel continued his studies with Walter Nothas in Munich, where he received his Master Diploma in 1994.

The same year he was awarded the first prize at the International Music Competition in Finale Ligure, Italy.

Since 1993, Clemens Weigel has been a member of the ‘Staatstheater am Gärtnerplatz’ Orchestra in Munich. Beside working as a soloist, he is also a member of the well-known Rodin Quartet, the Berlin Ensemble and the Wolfgang Bauer Consort.

Since 1999, Clemens Weigel is teaching at the Hochschule für Musik und Theater in München. Clemens Weigel also gives master classes all over the world.