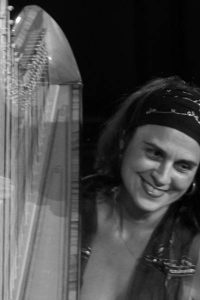 After beginning harp at the age of six at the Nice Conservatory, France, with Elisabeth Fontan Binoche, Christine Icart brilliantly finished her studies with the first prize of harp at the Superior Conservatory CNSMD – Conservatoire National Supérieur de Paris in the class of Gérard Devos, and at the same time improved with Marielle Nordmann for 7 years.

Alongside her soloist career, Christine Icart has always been very attached to transmission. She holds a french teaching diploma CA and started teaching at the age of 18. She has trained many amateurs and professionals.

In 2011 she was appointed professor of harp, reading and chamber music at the Music Superior Conservatory of San Sébastian “Musikene” in Spain. She has also been teaching  in France since 1988.

Her repertoire stretches from the 18th to the 21st century and has led her to perform as a soloist or in chamber music in venues such as Gaveau, Pleyel, Radio-France, Théâtre des Champs Elysées, Paris Orsay museum, Paris Georges Pompidou center, Royaumont Foundation as well as in numerous festivals in France and abroad, notably in Germany, Spain, Italy, Indonesia, Thailand, New Caledonia, Russia…

She has recorded a flute and harp CD with Philippe Bernold, Louis Vierne’s Melodies with Mireille Delunsch, a CD/DVD based on Joseph Kosma’s melodies recorded with singer Françoise Masset who has obtained 5 Diapason, Claude Debussy’s Sonata for flute, viola and harp with Juliette Hurel and Arnaud Thorette, and the “Danse sacrée” and “Danse profane”  from Debussy with the french “Orchestre des Pays de Savoie”.

Christine Icart was also the founder and artistic director of Les Rencontres Musicales de Savoie from 1998 to 2013 (annual program and summer festival).