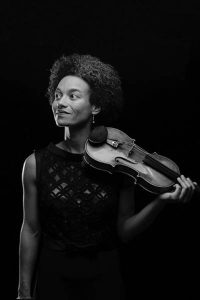 Ann-Estelle is a prize-winner of the International Competition “Vaclav Huml” in Zagreb in 2001 and of the Long-Thibaud Competition in Paris in 2002, where she received the Prize for the best interpretation of a work by Mozart.

Curious and passionate, her career demonstrates her versatility:

In 2015, Pinchas Zukerman invited him to Ottawa to play Bach’s double concerto with him and also to play as an octet with Itzhak Perlman.

Happy to transmit, Ann-Estelle is committed to teaching young violinists in Martinique. Since 2013 she has been a professor at the Superior Conservatory : Pôle d’enseignement supérieur de la musique de Seine-Saint-Denis, “Pôle sup 93”.