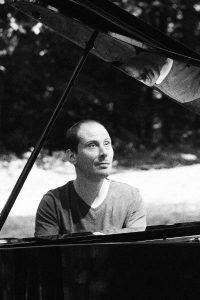 Collaborator of the Milan Symphony Orchestra from 2000 to 2004, he played several times under the baton of Riccardo Chailly.

He plays in several Festivals such as the “Roque d’Anthéron” piano festival, Festival “Romaeuropa”,  “Settembre Musica”, “Les Musiques” in Paris Cortot Hall, at the Berlin Konzerthaus, in Maastricht Theater, Lausanne, Milan Auditorium, Geneva Victoria Hall. His concerts have been broadcasted by the Italian, French, Swiss and Dutch Radios.

His chamber music activity is also remarkable. He graduated from the Conservatory of Rome in chamber music and studied with the Trio of Trieste in Duino and in Siena and also at Imola Music Academy . He played in several instrumental ensembles, notably with the soloists of the Milan Symphony Orchestra.

Since 2007, he leads a project exploring vocal music with baritone Bruno Taddia ; with the schubertiens cycles Winterreise, Die Schöne Müllerin Schwanengesang were given several recitals in Italy and France, including the Villa Medici in Rome and Paris, Musée d’Orsay. The duo was in residence at the Royal Abbey of Fontevraud in 2010.

Among his next appointments : recitals with baritone Bruno Taddia around Schubert and Donizetti, the continuation of a great project around birds in keyboard music …

Passionate about education, Andrea Corazziari taught piano and chamber music at the Conservatory of the 9th arrondissement in Paris from 2006 to 2018, and he is currently professor of piano at the “Olivier Messiaen” Conservatory in Avignon.