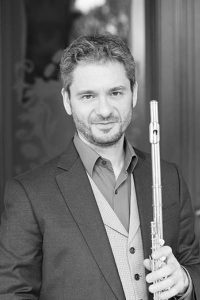 Its Summer Academy, the International Flutes Seminar Bruges, welcomes students from all over the world. Www.ifsb.be

During his studies at the Royal Conservatory of Brussels, with the Prof. Peter-Lukas Graf at Basel Conservatory where he obtained the Soloist Diploma, and with Philippe Boucly (R.Strauss-Konservatorium München), he won prizes at the Maria Canals (Barcelona), Vienna, Axion Classics, Young Talents, Quantz and National Instruments.
He has also received the Alex de Vries, SABAM, Pelemans and Caecilia Awards (Belgian Music Press Award).

He has recorded for Pentatone, Cypres, Phaedra, ECM, Royale Belge and Beriato labels.
His recording of F. Schubert Variations Trockne Blumen with German pianist Martin Helmchen was nominated for Best Recording of the Year by BBC Music Magazine in 2010.

From 1989 to 1993, Aldo Baerten was flute-solo of the European Union Orchestra, where he played under the direction of C. Abbado, B. Haitink, V. Ashkenazy, V. Neumann, J. Conlon and J Tate.
He was also chosen as Flute-Solo of the Schleswig Holstein Festival Orchestra (Sir G. Solti) and the Jeunesses Musicales World Orchestra.

He was Flute-Solo at the Belgium Chamber Orchestra, as well as at the MDR Sinfonieorchester Leipzig.