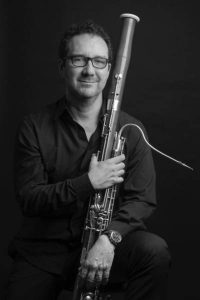 Music critics are unanimous in praising Khramouchin’s unforgettable, highly individual performing style, the broad scope of his interpretations, and his faultless technical mastery. He completed his training at the Hochschule für Musik of the Mozarteum in Salzburg in the class of Milan Turković.
The Italian-Brazilian bassoonist has been a member of the Modern Ensemble in Frankfurt and the Camerata Academica Mozarteum in Salzburg.
He was hired in 1987 by Armin Jordan to the Orchester de la Suisse Romande, where he held the position of first solo bassoon.
In 1989 he won 1st prize at the International Competition for Wind Instruments organized by the Swiss Union of Musical Artists (USDAM).

He also performs as a soloist and in chamber music in various countries in Europe and South America.

Afonso Venturieri is a regular guest for internships and master classes in South America, Canada, Europe and Asia. He is also involved in the training of young musicians, for example through the role of coach of the Youth Orchestra of the Americas.
Afonso Venturieri is bassoon professor at the Haute Ecole de Musique in Geneva.